In keeping with some of the ‘normal’ watering regimes that have been used for many years, the old hose-and-sprinkler system works just fine.  Mimicking natural rainfall – albeit using treated municipal water, and now harvested rainwater – the droplets fall from above, striking the leaves and stems of plants, washing off dust and the odd insect, before meeting the soil.  At soil level, infiltration into available pore space is quick, since the falling array of drops has moved past this spot and on to another area.  Unless the soil is very heavy (ie. clayey), or the water has been left on for too long a period, or there are grading problems and/or impervious areas nearby resulting in surface runoff and collection, puddling of water does not take place.

Most avid gardeners enjoy and appreciate the interaction with the garden, whether tending plants, weeding, watering, pruning, or harvesting, and manning the sprinklers is no different.  The landscape on this property is well established, but still must endure a six-month warm period where only about 25% of the annual rainfall occurs.  Irrigation is almost essential: native plants, or those that are ecologically attuned to the climate, reduce irrigation requirements.  In this case, ensuring the possibility of 25 mm (1″) of rainfall/irrigation per week is desired.  It should be noted that some edible landscape plants may also be incorporated into the plantings.

Of the landscaped area, about 43 sq m (460 sq ft) is slated for intensive use, the remainder being turf (allowed to go dormant through the driest seasons), or shrub and perennial border.  Some overlap during watering is expected, and no well-defined boundaries as with the veggie garden area are anticipated.  Harvested rainwater for this landscape will come from about half of the roof of the main building, with storage under the raised, vinyl-covered deck at the back.  There is a concrete surface under the deck, sloped very slightly towards the building, which currently drains mainly to the driveway side and is not a problem for spillage.  Overflow from the storage will be connected to the stormwater drain system, and a small (solar-powered?) on-demand pump will provide pressure to the hose and sprinker connections.

The storage volume for this irrigated area is estimated to be about 6,000 litres (1,320 Imp gal), to be situated under the deck area in a bank of low, square cistern tanks.  Each tank, made of polystyrene, is less than 0.9 m (36 in) in height, and will easily fit under the deck structure.  Being modular, it can start out with only one or two units and be expanded later as needed.  The stormwater management (SWM) component will also be incorporated here, whether early on or later as well, depending on approvals from the municipality.  Storing a total of 12,600 litres (2,770 Imp gal, or 27%) of the potential catchment over the season, the remaining 34,100 litres (7,500 Imp gal) will be SWM and overflow.

A schematic of the cistern tank array is shown here, with connections, and in two images, with the deck made semi-transparent. 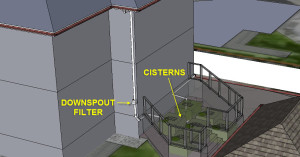 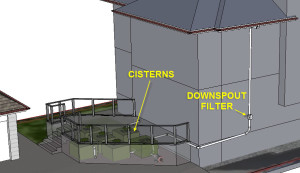 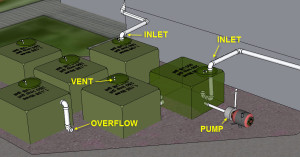 A schematic of the installation follows. 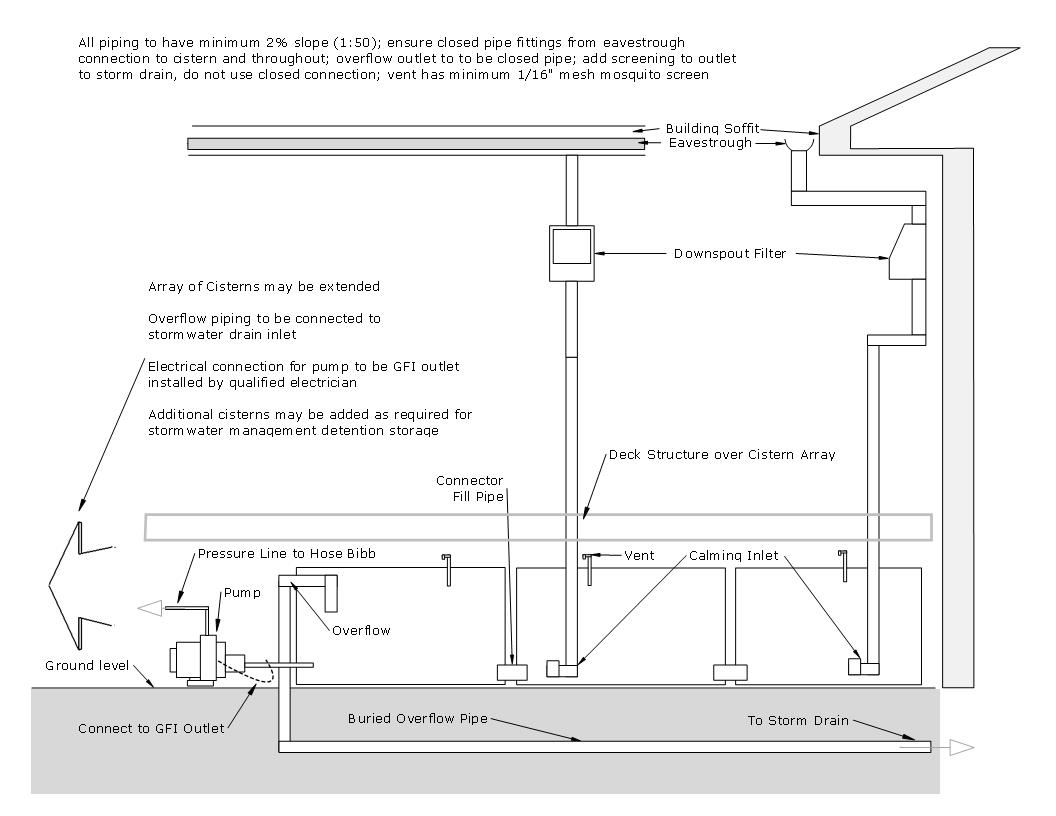